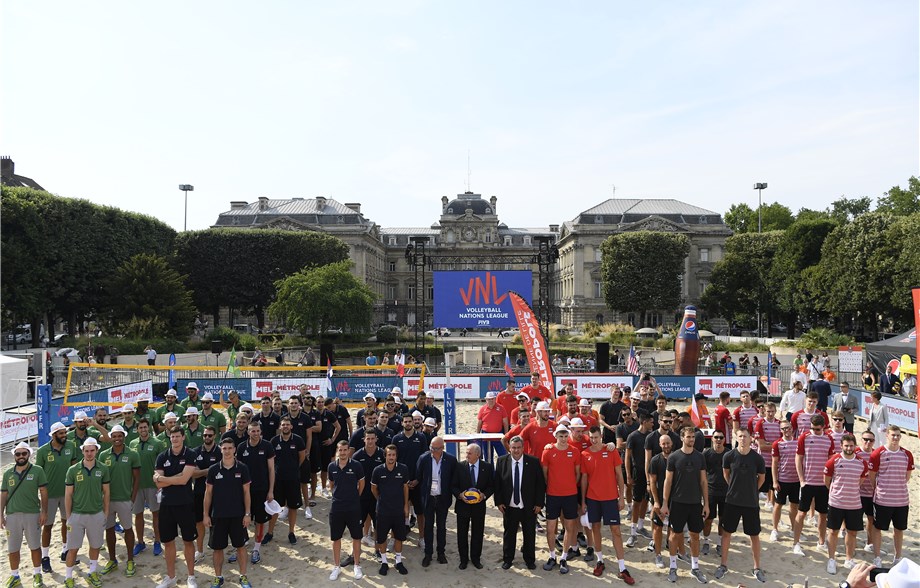 Lille, France, July 3, 2018 - The city of Lille caught volleyball fever this evening when FIVB President Dr. Ary S. Graça F° officially opened the 2018 FIVB Men's Volleyball Nations League Finals with a city centre celebration to get everybody in the party mood for the next five days of world class volleyball action.

Each of the six teams that have qualified for the Finals paraded in the Beach Volley Village at Place de La Republique in Lille, with volunteers from each nation waving their country's flag, before captains, coaches and representatives from each country posed for official photographs.

President Ary Graça praised the organisers and city officials, before officially welcoming the teams to France.

"Lille is a very colourful and dynamic city, and I am very happy to be here today to celebrate volleyball and our great athletes. In over 120 matches over the past five weeks, our athletes have shown incredible athletic performances and produced amazing results.

"I would like to congratulate the great teams who have qualified for the VNL Finals: France, Russia, USA, Serbia, Brazil and Poland. I have no doubt you will continue to impress your fans and light up the Stade Pierre-Mauroy tomorrow."

The European Metropolis of Lille Sports and Grand Events Delegate Eric Skyronka and the French Volleyball Federation (FFVB) President Eric Tanguy were also in attendance at the event. 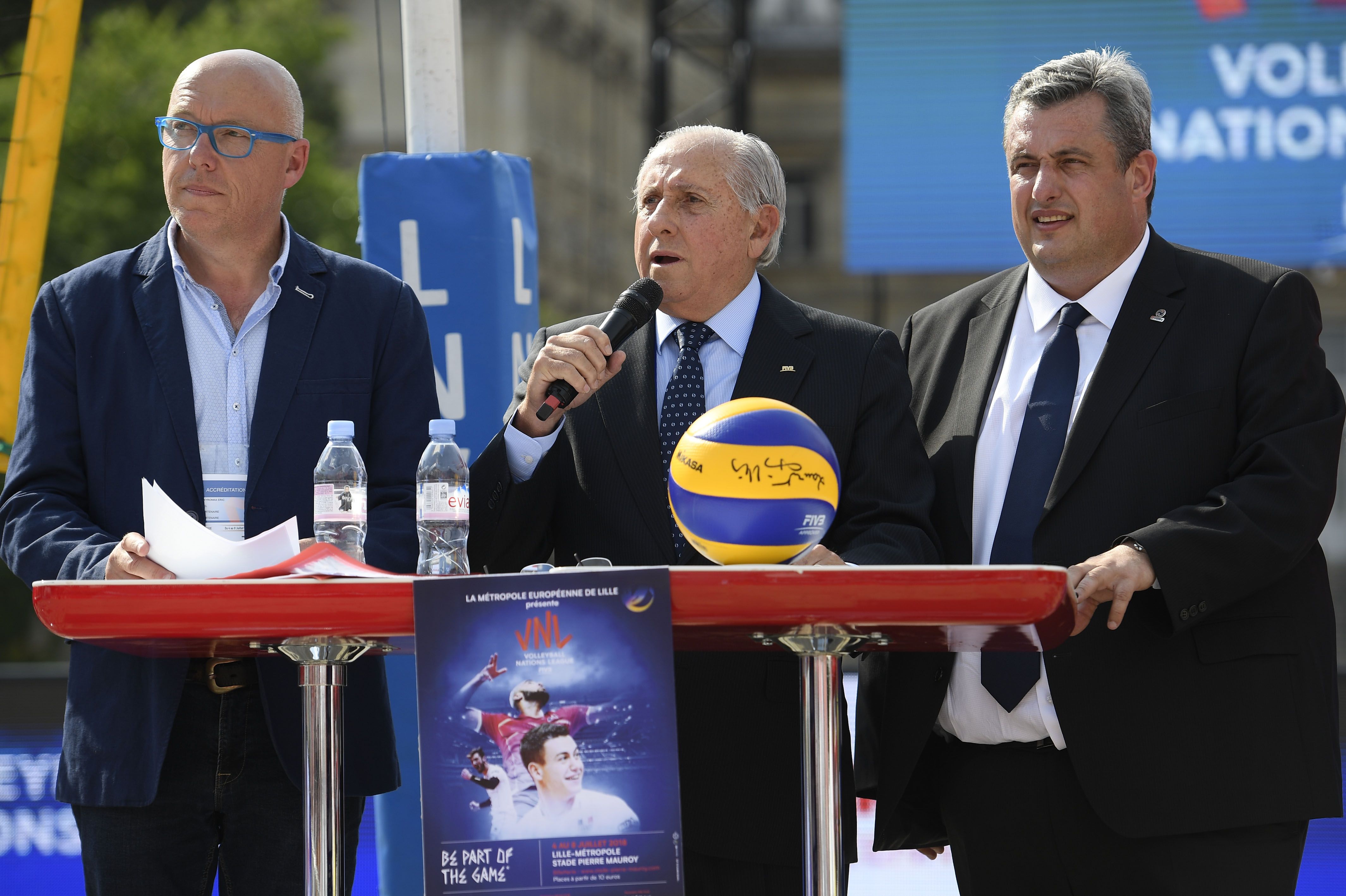 Addressing the crowd at Place de La Republique, FFVB President Eric Tanguy thanked the FIVB for their trust in awarding the hosting of the VNL Finals to Lille.

"Thank you President Graça for trusting us and allowing us to host such a prestigious competition. It is a huge honour for France to host this event. For the coming days, Lille and the Stade Pierre-Mauroy will be the world capital of volleyball.

"I'd like to welcome all the finalists to France and hope the best team wins."

Eric Skyronka then thanked the FIVB and FFVB for choosing Lille as hosts.

"It's summer and we have sand at the heart of the Metropole Europeenne de Lille. We are delighted that Lille is hosting this competition and we want it to be filled with cheering crowds full of young people. We have gifted tickets to 11,000 children.

"I want to thank the FIVB and FFVB for having the confidence in us to host this competition. Good luck to all and may the best team win. Vive le volleyball and vive la Metropole!" 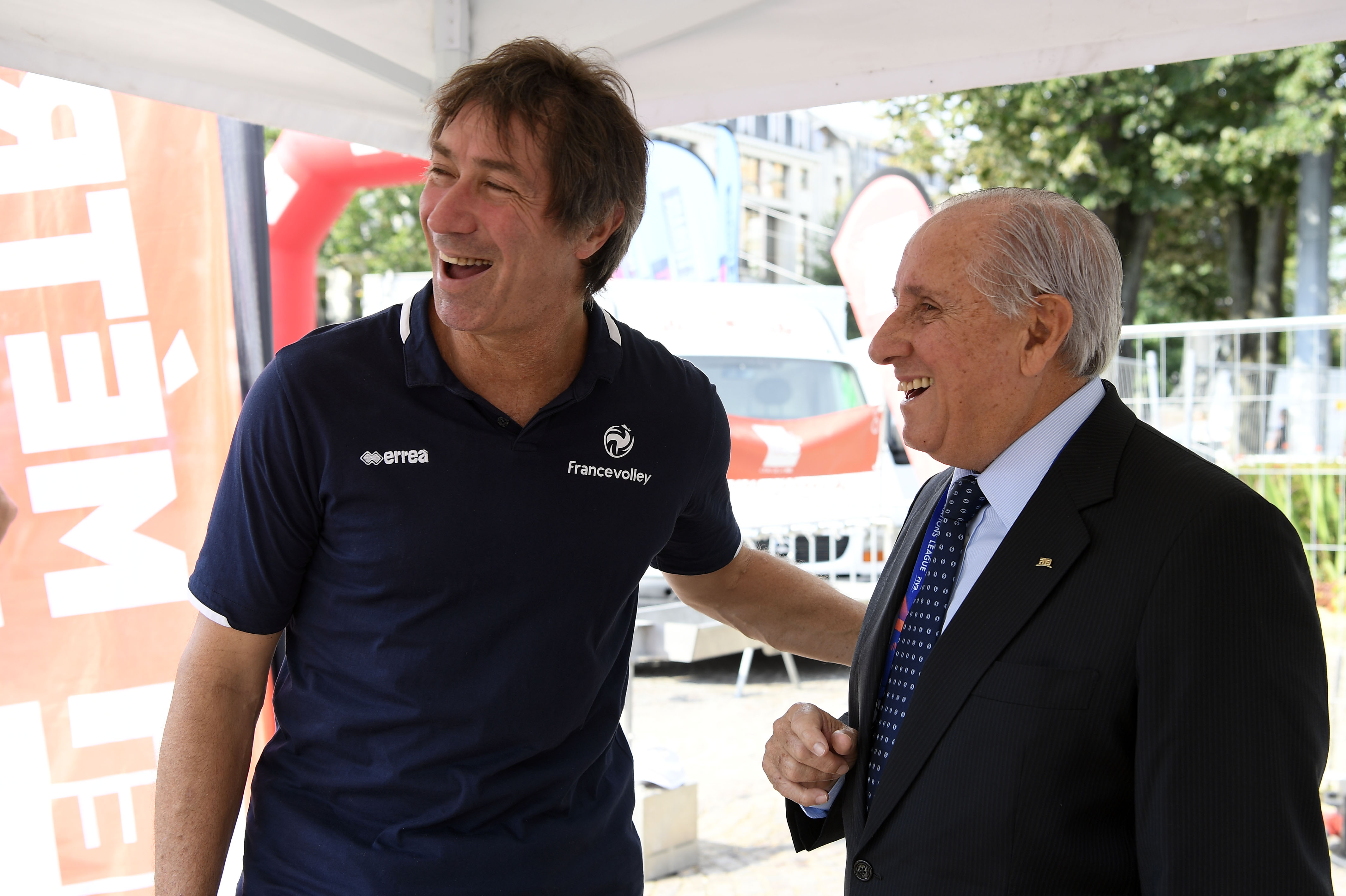 FIVB President Dr Ary S. Graça F° has a chat with France head coach Laurent Tillie at Lille's Place de la Republique on the sidelines of the event that opened the 2018 VNL finals.

From July 4-8, the Final Six will battle it out at the state-of-the-art Stade Pierre-Mauroy for the chance to become the inaugural VNL Men’s champion. Throughout the Preliminary Rounds, the VNL has wowed fans on and off the court by putting spectators at the heart of the action.

As the biggest revolution in volleyball in the past decade, the VNL has set new standards for fan engagement and experience. Using the latest cutting-edge technology, the FIVB has provided fans, both in the stadium and watching all over the world, with the most engaging experience. The FIVB has partnered with Microsoft to launch the Volleyball App, which allows fans from all around the world to watch highlights, read the latest news, and discuss all the developments from each week in the VNL.

Courtside DJs and volleyball-inspired dance moves have made fans inside the stadium part of the action, not just helping to teach them the sport but keeping them entertained during breaks in play. Spectators who have secured tickets for the gold medal match will also be treated to an exclusive performance by Grammy award-winning DJs NERVO.